Fortunately for all of us, Sam, a four-year-old 130 lb. Newfoundland wasn’t stranded too far up the Dirty Harry’s Balcony Trail. We’d gotten a call from Sam’s owner and headed out after getting permission from King County to do so. Our call coordinator also called our friends in King County Explorer Search and Rescue (ESAR) to see if they might be available and willing to assist. July is a busy time of year—definitely the busiest for us and we know ESAR was busy as well. Just the night before they’d assisted us on another callout for a dog, also stuck up a trail.

Sam was only about 25 minutes up the trail and laying calming and breathing normally on the side of the trail when we got arrived at his location. His owner had doused him with water in case the issue was heat exhaustion. We weren’t sure what the issue was. It could have been heat exhaustion or it could have been an unknown injury, so we handled him carefully. We rigged an emergency lift harness from a section of webbing so we’d have a way to tie him to the litter. We put a quick emergency muzzle on him. It’s our policy to do so—hurt animals may react out of fear or pain and we do everything we can to keep everyone safe.

ESAR had the litter ready to go. We coaxed him into laying on his chest rather than his side briefly so we could tip the litter under him. We got it under him as far as we could, then pulled him the rest of the way on. ESAR members usually carry Thermarest foam pads and the team had leant Sam some for the bottom of the litter so he could ride more comfortably.

We tied him in quickly with a couple of webbing straps we attached to the harness. After that we lifted him up while a couple of the team members attached the single wheel to the bottom of the litter. As soon as we were ready to go we checked in with Sam again, who seemed calm and accepting of what was going on. Because the muzzle would keep him from panting, we decided it was safe enough for us and certainly better for Sam to be able to cool himself to have it off.

We headed carefully down the trail. More ESAR volunteers met up on the way down, lending extra hands and fresh muscles to the trip down the trailhead. We stopped occasionally to offer Sam some water and swap out volunteers on the litter.

We made it down safely, and loaded Sam into the owner’s car and they headed off to the emergency veterinary hospital.

Gus, Dog Over a Cliff
Next Post: Dropbox at WASART » 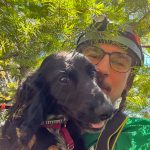